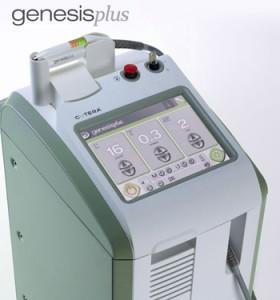 There is a better way to treat toenail fungus (onychomycosis) that does not entail using harsh medicines that work in only about half of the patients. We are pleased to be now offering the Cutera GenesisPlus laser treatment for toenail fungus in Long Beach, CA.  This laser is FDA approved.  GenesisPlus is a quick and comfortable way to clear the nail without drug therapy. Clear nail growth can be observed following 1-2 fifteen minute laser treatments.

Toenail fungus often occurs in adults and can be contracted in many different ways including pedicures by others, nail injuries, or even wearing closed-in footwear. However contracted, usually you will notice brittleness, discoloration, and thickening of the nail including change of shape. If left untreated it can permanently damage the nail and spread to surrounding nails and skin.

Over-the-counter creams and ointments generally do not help in the fight of toenail fungus. Medicines for toenail fungus need about 12 months to treat this condition and are only successful in about 50% of the patients. Even if your healthcare provider removes the nail it may take over 1 year for the toenail to grow back.  We have awesome results with our Cutera GenesisPlus laser treatment.

What is Toenail Fungus?

Onchymycosis, also know commonly as Nail Fungus, affects about 10% of the population. It can cause nails to become yellow or discolored. As the infection progresses, the nails become dark, thick and brittle. Nails can become painful or ingrown. An infection is caused by contact with the fungus, which is everywhere in the environment, especially swimming pools, public showers, gyms and nail spas. Trauma to the nails can also increase the chances of infection, as well as age and poor health. Diabetics are more susceptible to the infection.

What are treatment options for Toenail Fungus?

Oral drugs can be effective in treating the fungus. The medication can take anywhere from 12 months or longer for clearing of the nail. Side effects are a concern with oral treatment. Blood tests are necessary for three months to monitor for side effects. Topical drugs less effective in treating nail fungus and restoring clear nails. It is applied once or twice a day until the nails are clear, which take 12 months or longer. There are no significant side effects, however in some patients, the medication cannot penetrate the nail to reach the infection. Laser treatments are effective in treating the infection and restoring clear nails. 88% of patients experience at least some improvement. A clinical study shows no adverse effects.  The laser does not work faster, the nails still take 12 months or longer to grow out and become clear of nail fungus.

How does the Cutera Laser Treatment for Toenail Fungus Work?

The Cutera GenesisPlus Laser, which is FDA approved in the treatment of nail fungus, works by passing a laser light which gently heats up the skin underneath the infected nail bed. Once the target temperature is reached, the laser has killed the fungus. Since the nails grow very slowly results usually are seen in 6-12 months. Following the treatment, post care instructions will be given.

Does the Cutera laser treatment for toenail fungus hurt?

The Cutera laser provides a comfortable safe feedback. Patient feedback is also important during the procedure. A warming sensation will be felt in the nail bed as the laser is passed over the nail. If the nail becomes painful, the patient can take a break. Immediately following the procedure, the nail may feel warm for a few minutes and  patients can resume normal activity.

How many and how long are the fungal toenail laser treatments?

Most patients show improvement after one treatment, and most patients do not need a second lasering. Each treatment session can vary from 20-40 minutes.

Are the laser treatments covered by insurance?

How soon will I see improvements after Cutera?

In humans, nails grow at an average rate of 3 mm (0.12 in) a month. Fingernails require 3 to 6 months to re-grow completely, and toenails require 12 to 18 months. Actual growth rate is dependent upon age, gender, season, exercise level, diet, and hereditary factors. As the new nail grows, the healthy nail will be seen at the base.